One of my fellow writers (Nicole, that was you, right?) says my novel is like a low-budget film: the settings are few, small and usually indoor, and the characters keep returning to the same places.

In true low-budget film style, one of these settings is a car. When the protagonist is in his car, the scenery going by could be pure stock footage.

The car itself, on the other hand, is a vitally important set-piece and I need to be able to describe it accurately and richly. Thus: the Auto Show.

At the Auto Show, people let writers in to look at cars that are worth more than houses. The car in the picture is a Bentley Mulsanne. Two nice women let me inside the ropes to take pictures of it!

I now know the colour, sheen, specs and even the smell of this car. I cannot share the smell with you here, but as for the rest: 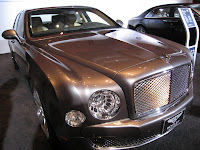 I was not, unfortunately, allowed to sit in it. Or touch it.

I did discover, incidentally, that the Auto Show staff were uniformly polite and considerate toward those of their patrons who walk with a cane.