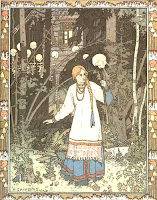 As of an hour ago, I have five stories out on submission. This is a new high water mark for me.

(Two of them are reprint submissions, but still.)

I also had the jawdropping realization this week that I have a personal theme. All of my novels, and many of my short stories, are about pairs of magicians, one mentoring the other.

In trying to trace back the origins of this very persistent meme in my own life, I came back to the Vasilissa story. This story has been interpreted by Clarissa Pinkola Estes as a story about women’s intuition, as Wikipedia reminds me; I remember reading Estes at the direction of my therapist, when I was in university, and thinking that she basically took a whole pile of interesting old stories about women and said that they were about intuition, which galled me a bit, since I don’t possess much of that thing.

To me, this story feels like it’s about power. Not necessarily feminine power, either, not in some essentialist way: we’re talking about flaming-eyed skulls, people. Clear, burning sight.

Baba Yaga, the elderly witch who lives in the forest, teaches Vasilissa, the young seeker, how to wield power, in the form of the flaming skull. Vasilissa wields it against her enemies (it burns her wicked stepfamily to death). Instead of going power-mad, Vasilissa moves to the city to become a weaver. She gets really good at it and impresses the czar’s son, who then marries her. Another reason I like the story: it’s sometimes called Vasilissa the Beautiful, but her beauty is not a plot point at all. She is brave, intelligent, fair, wise, and hard-working. She makes her own way.

But she doesn’t make it alone. She has help from her mother, in the form of a magical doll. And this help, in turn, allows her to make it through Baba Yaga’s tests until Baba Yaga deems her worthy of receiving the skull. The prickliness of this relationship fascinates me. Vasilissa somehow sees, in a dangerous and somewhat hostile witch, the promise of an education, and a powerful future for herself.

And apparently this idea has taken root in me more than almost any other. Five novels, five pairs of magicians. I’m including my childhood novel here, because I wrote it when I was barely a person yet, and still, already, this was what I wanted to talk about.

In that first book, which I wrote at fourteen, the two magicians were romantically involved. Totally inappropriately, I might add–she was sixteen and he was twenty-five, and I only made him twenty-five on paper… he was really thirty in my mind. (I think it reflected the fact that my animus, my intellect, was pretty mature for my age but my girl-self was woefully…not.)

The second novel was never finished. The older magician was a monk, and the younger one a sort of feral child-warrior. No romantic relationship (good) but way too much of a parental relationship, which made the whole thing kind of boring to write, for a kid trying to grow up.

By the third book, I’d figured out that the young woman/older man combination was a huge red herring for my potential readers. I didn’t want to tell a story about daddy issues. I wanted to tell a story about a mentor relationship. So I made my magicians gay men, and gave them each outside love interests.

Fourth book: the magicians are stepsisters. This is the explicit Vasilissa book, so it was way more important to have the characters be women. I was also starting to figure out that this was a theme–not consciously, not totally, not yet.

Fifth book: the magicians are gay again, and former lovers. The younger one’s just figured out that his life is a wreck, and turns to the older one for guidance, only to discover he’s part of the problem. I think the mentor relationship is getting more complex now: it’s not only about the power that can be learned, but about the damage that can be done by someone who doesn’t take his own influence seriously enough.

So now that I’ve teased out this theme–and I’m truly embarrassed that it took me five books to notice–I’ve got to wonder: why is this my story?

And did it set me up to find, in my own life, the excellent mentors I’ve had?

4 thoughts on “In which I have elderflower nectar”