I haven’t posted for a while because I’ve been out of town: four trips in six weeks, making for a very dense and colourful summer.  Most of my writing time has been in airports.

Why have I been travelling, you ask?  Mostly family stuff, but some important writing stuff: Readercon.  I flew down with Leah Bobet and Gemma Files–a veritable convoy of Canadian talent.  This was my third time attending, and some things have begun to feel like traditions (the Viable Paradise Saturday night dinner at Redbones, the greasy spoon breakfast with Chang and Marko).  Other things were shiny and new, particularly the Outer Alliance meetup, at which I experienced a spontaneous and utterly thrilling occurrence–I got to sign people’s copies of Beyond Binary.  Photo by Julia Rios: 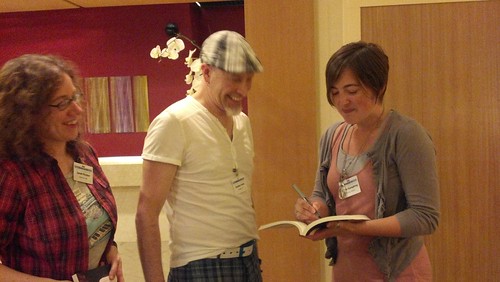 Expect to see me on panels this coming year, assuming the con programming committee wants me–I think I am ready to start speaking as well as listening.

The other recent writing benchmark was not so positive: for the first time, I reached double-digit rejections on a single story, which at the time of this post has still not been sold.  For comparison, one of my most successful stories has two sales and zero rejections, and the other has three sales and three rejections plus an honourable mention from Ellen Datlow.  Also, my writing career to date hasn’t been very long–I’ve banked 35 rejections in total, so for this one story to be responsible for 10 of those is… not great.

Why haven’t I retired this story?  It’s been through a couple of rewrites, so many of those rejections were for an earlier version.  Maybe it would have sold by now if I’d been submitting the current version all along.  (Also, if I retired it I’d be breaking Uncle Jim’s Rule: ‘Til Hell Won’t Have It.)

Also, I don’t write stories unless I need to.  This story had to be written, and so it has to be read.  I just haven’t figured out where its audience is.

4 thoughts on “In which there are Historic Moments in the Life of Clairification, Professional Writer”