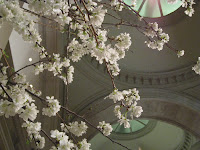 It was mainly a business trip, but when one has been doing the same job as long as I have, business and pleasure become irretrievably mingled. I visited my friend Helen at the Assouline bookstore in the Plaza Hotel, which is one of those places where culture and myth and aspiration and art all collide in alchemical perfection. We had a glass of wine and talked about A.S. Byatt and watched the carriages on the southern edge of Central Park. I wanted to buy an ostrich egg, or a bronze bust.

When I came home, I went to hear Andrew Kaufman interviewed about his second novel, The Waterproof Bible. We’re friends; I’ve had the pleasure of hearing about this novel before; but it’s quite different now that the novel is an object, a thing that exists on its own independent of Andrew’s creative mind or the kind of conversation that happens between writers.

One thing that struck me is that Andrew now knows the theme of this novel, in a way that I don’t think he did when he began it. I might be projecting; I know I certainly had no idea what the theme of Cossack’s Kin would be when I began it. I don’t think that way, and I don’t think many of my writer friends think that way. Anyway–that’s a post for another day. The important thing is that Andrew was funny and awesome, and his book is funny and awesome, and you should go read it.