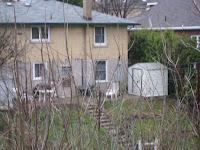 I lived in this house the summer I grew up. This house stands beside railroad tracks, not far from the downtown of a small city which is laid out like a European town, with a plaza at the very centre. When I lived there, this house was shabbier, and the deep hollow of the yard was filled with lilacs.

Part of me has never left this city. It makes appearances even now, disguised as cities of my imagination; in my stories, the square is broader, but a diner still serves breakfast on one edge of it, and a fountain still plays, and people busk there, and people come to watch an eclipse.

Last weekend I visited this city, and in a solitary half-hour I walked a circuit of my old houses, and took pictures of them as they are today. I believe this house here is the only one of which I have no pictures from before. I wanted it that way, at the time, because I was unhappy there. Now I wonder when this house will have its turn in my imagined city, and who will live there, and whether she will walk home as I did, in the early morning, tired eyes set against the dew-bright grasses beside the tracks.