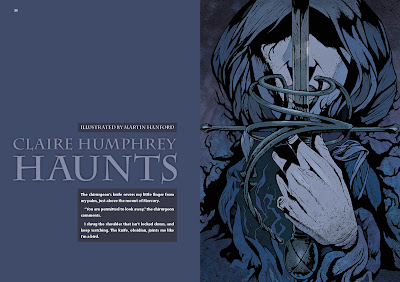 You guys, I can’t even tell you how excited I am by this.  I’ve never had an illustration for one of my stories before, and this one is beautiful!  It’s for “Haunts”, coming out in Interzone #249 in November.

This story has its roots in an eclipse, back in 1993 or thereabouts.  I lived in a small city with a fountain in a square downtown.  My best friend and I watched the sun go dark and then we went for breakfast.  As often happens with stories, I can’t quite describe how I got from that eclipse to this rather dark story about an ex-duelist selling off her fingers to keep her failing school from closing.  I can tell you it has some other hidden ingredients from the time of the eclipse–a kitten who only lived a few days, a house in the west end where the lilacs were all cut down–but how those little realities are woven into this fiction, I can’t even explain.

There were some wrong turns–I finished the first draft of this story a few years ago, but I didn’t finish the final draft until quite recently, and it changed a lot in between.  Now it’s finally about to meet the world.  I hope the world likes it.